In my last post on Afghanistan’s Presidential election, I remarked that Abdullah was very likely to win the runoff, and then added in passing that Ghani would “need a miracle or massive vote fraud” to win. Perhaps I was too dismissive about the possibility of fraud, given the blatantly fixed 2009 Presidential election. In any case, the preliminary results have been released, and fraud certainly seems to have taken place on a massive scale. The fraud was blatant but largely confined to one area of the country, which should at least make it easier to combat, if anyone in Afghanistan actually tries. First, I’ll post the map of the preliminary results below. It simply shows the official winner of each province; the second map reflects whether the winner of the district won narrowly or in a landslide. 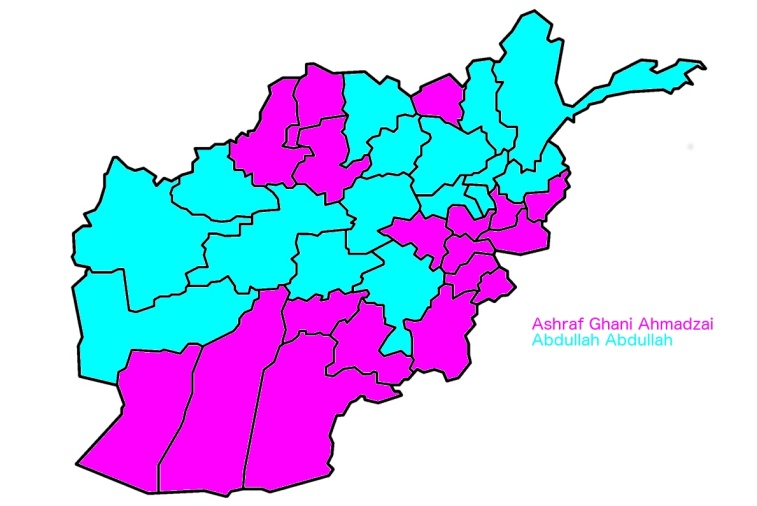 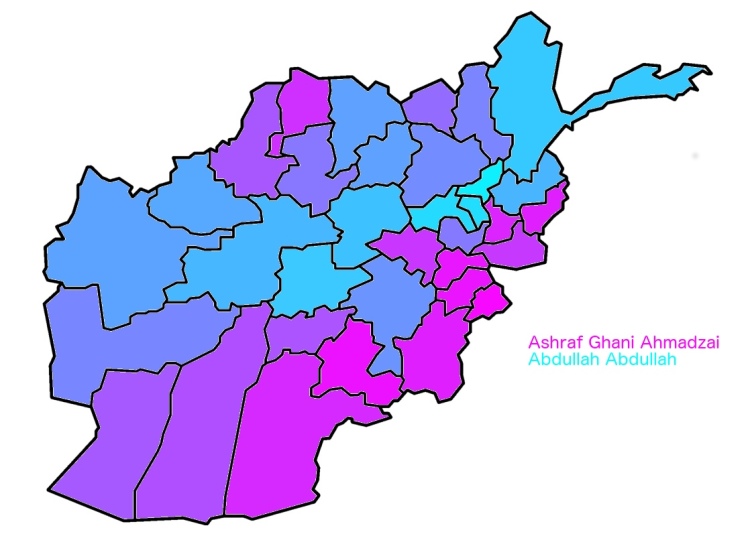 If you look back at my original post  back in May, on the first round of the elections, the second round followed largely similar patterns, although a handful of provinces changed hands. Abdullah added Farah province, while Ghani took Kandahar from third-place finisher Zalmai Rassoul, and Kabul, Wardak, Kunduz, and Sar-e-Pul from Abdullah. The other 28 provinces stayed in the same hands, so it is unbelievable that Ghani managed to more than double his vote total between the first and second rounds (2,084,547 to 4,485,888). This wasn’t a rising tide lifting all boats; it was Ghani running up the score in a few provinces he already dominated in the first round. The seven provinces more or less opposite Pakistan’s Federally Administered Tribal Areas (FATA) are the main suspects. These provinces are, roughly from north to south, Kunar, Nangarhar, Logar, Wardak, Paktia, Khost, and Paktika (see here for a map of Afghanistan’s provinces). Unsurprisingly, given their proximity to Pakistan’s Tribal Areas, these provinces are some of the most war-torn in Afghanistan. TTP leader Mullah Fazlullah is believed to be based in Kunar, and Khost is the Haqqani Network’s home base. These seven provinces make up about 16.8% of Afghanistan’s population, and accounted for about 17% of the vote in the first round. In the first round, a hefty 31.9% of Ghani’s total vote came from these provinces. In the second round, 26.3% of the total vote, and 40.8% of Ghani’s vote came from the suspicious seven; 97.6% of the turnout increase between the first and second rounds came from these seven provinces. I couldn’t find the number of registered voters by province, so I used the percentage of the total population that turned out to vote as a proxy. Since children can’t vote and many eligible voters don’t cast a ballot, the turnout should rarely exceed about 40% of the population. I would estimate that any number above 50% of the total population voting is approaching 100% turnout of eligible voters. Below is the map of Afghan provinces by percentage of total citizens who voted in the first round.

And next is the map showing the same variable from the second round:

While turnout in the East increased in general, three provinces, Paktika, Paktia, and Khost stand way out (I imagine even someone who doesn’t know Afghanistan’s provinces could identify these three on the map above). These provinces form the core area of operation for the Haqqani Network and are among the most violent in Afghanistan. The idea that these areas would have “normal” high turnout is a stretch, but what we see here is preposterous. Paktia province had about 64% of its population vote. To give a bit of context, in 2012, about 54% of high-turnout Minnesota’s population voted in the American Presidential election (that would be 76% of eligible voters). Khost province saw turnout reach 73.2% of the population, and Paktika clocked in at a positively inspiring 97.8%. Since over half of Afghanistan’s population is under 18, I doubt that more than 60% of any province is eligible to vote, and that is generous. That means that turnout of eligible voters in Paktika approached 200%, and the other two were almost certainly over 100%. These three provinces netted Ghani about 970,000 votes, or 94.4% of his winning margin.

What I find curious about the fraud is how blatant it is. Even Kim Jong-un only managed 99.97% turnout in his recent “election” victory in North Korea. 200% turnout is hilariously blatant, and was therefore almost certain to be uncovered. Why didn’t Ghani’s people just stuff ballot boxes throughout the country to give him a 10% boost? Abdullah seems to be alleging that Ghani did that as well as the blatant fraud in the east, seeing as he wants 2 million ballots thrown out. It is hard for me to evaluate that claim based on the data I have, though Ghani did do better in the second round across the board. Either there was wider fraud or Ghani experienced a surge in support. Whatever the case is with the potential for wider fraud, I think it is indisputable that massive ballot stuffing in Paktia, Paktika, and Khost occurred in Ghani’s favor. The fact that the massive fraud was concentrated there is interesting. Ghani was already very successful in these provinces in the first round, so the fraud didn’t overturn the will of the voters there; it amplified it. This may explain why there was so little fuss kicked up by local officials. Abdullah cried foul of course, but I haven’t seen anyone from these provinces comment on the fraud. They want Ghani to win. I wouldn’t even rule out the possibility that local leaders stuffed the ballot boxes in an attempt to curry favor with Ghani.

The real question though is whether Abdullah actually won the election or if Ghani won anyway and was just gilding the lily. I don’t know the answer, but I suspect the actual election was very close. If we use the percentages from the second round but the turnout from the first, Ghani wins 51.8% to 48.2%. If we use the second round results but replace the results for seven provinces mentioned above with the first round results, Abdullah would win very narrowly. The other question is whether someone who engaged in blatant fraud on a massive scale should be allowed to ascend to power, even if he won the election legitimately. The fraud shows that Ghani has little respect for democracy and is willing to do anything to gain the Presidency. People like that should be kept far away from power. Imagine if President Obama, having legitimately won the 2012 Presidential election decided, just in case, to fake a few million votes in Philadelphia, Cleveland, and Denver. It is very hard to imagine anyone in a functioning democracy surviving that politically.

A few other thoughts in closing: Last time I wrote about this topic, I discussed how the Persian-speaking part of Afghanistan has the demographic power to dominate the Pashto-speaking parts, and that an Abdullah victory has the potential to tear Afghanistan apart if it is built entirely on Persian voters. The reverse is true for Ghani. If he builds a coalition of Pashtuns and Uzbeks, and adds a million or so fraudulent votes, he could cut the Tajiks and the other Persian speakers out of power permanently. The ethnically-based voting patterns we have seen in Afghanistan are characteristic of dysfunctional democracies. Many voters in third-world countries treat democracy as a way to capture more power for their ethnic or religious group. This has been the case in Iraq and Afghanistan, as well as Pakistan. Last time, I wrote that the Pashtuns would not take kindly to being disempowered, and that they might not accept the results. The fraud in the heavily Pashtun east essentially reflects the Pashtuns not accepting the first round results. Now, the Tajiks are the ones who have been marginalized, and the exact scenario I laid out last time of increased ethnic tension and a north-south civil war could play out, but with the roles reversed.

Anyone who looks at Afghanistan today has to wonder whether this mess was worth a nearly fifteen-year occupation for the United States. All that blood and treasure was spent for what exactly? Ghani, if he ends up becoming President, will have won in part by stuffing ballot boxes in areas of Afghanistan dominated by the Haqqani Network, one of America’s bitterest enemies in the region. If the Haqqani Network didn’t like Ghani, they wouldn’t have allowed their home turf to become a vote factory for him. How can the U.S. maintain a relationship with someone like that? It is a cruel coincidence that, at almost the exact same time that Iraq descends into chaos, and the American adventure there is revealed to be a total failure, Afghanistan too has fallen apart. In this case, the collapse came even before American troops left, which should silence the people who wanted to keep American troops in Iraq (but it probably won’t). In Iraq, the failure of the democracy came because the two main religious groups weren’t able to play nice. In Afghanistan, it has been an ethnic divide. The really worrisome fact for the U.S. is that the failure of Iraq’s democracy presaged the collapse of its security apparatus. In Afghanistan the same thing is likely. At this point, it is hard to imagine Tajiks accepting Ghani as President, or Pashtuns accepting Abdullah. There is some possibility that the two will hash out some kind of compromise power-sharing agreement, but even if they do, Afghanistan’s democracy is dead. Let’s hope the Afghan state isn’t soon to follow.

What Do You Think? Cancel reply